I consider myself a student of history.  I enjoy looking through the lens of the past to see the present more clearly.  After all, the human condition has not changed across the epochs of time.  The circumstances around it have, the people in it have and cultural issues take different shapes in history but the struggles of human existence in a sinful world intersect constantly unbound by time.  I especially enjoy the singular glimpses into the lives of people through biographies.  What I learn about their character, their failures, their timely decisions that played into making them noteworthy individuals is interesting and helpful as I journey onward in my life.

Many of these individuals could be classified as great because of their influence on humanity at the given time and place they existed.  There are also great people in the Bible.  Whether prophet, priest, king or common person there are many that we can single out as worthy of the title “great”.  In Luke 9:28-36, while on the “Mount of Transfiguration”, Peter was quick to acknowledge greatness but also got a startling clarification of the difference between greatness and God-ness… 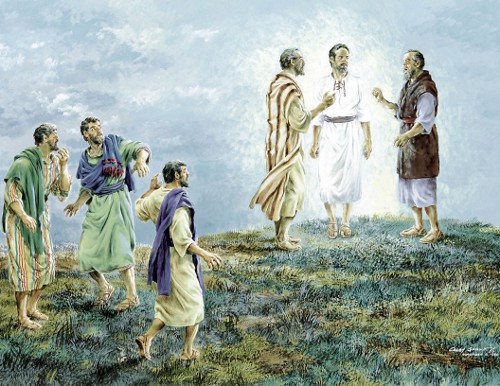 t came to pass, about eight days after these sayings, that He took Peter, John, and James and went up on the mountain to pray. 29 As He prayed, the appearance of His face was altered, and His robe became white and glistening. 30 And behold, two men talked with Him, who were Moses and Elijah, 31 who appeared in glory and spoke of His decease which He was about to accomplish at Jerusalem. 32 But Peter and those with him were heavy with sleep; and when they were fully awake, they saw His glory and the two men who stood with Him. 33 Then it happened, as they were parting from Him, that Peter said to Jesus, “Master, it is good for us to be here; and let us make three tabernacles: one for You, one for Moses, and one for Elijah”—not knowing what he said.

In typical Peter fashion, he had to say something!  And in any other circumstance it would have been an honorable suggestion to erect three monument-like structures to honor great men.  But one of those three was far from just great…

34 While he was saying this, a cloud came and overshadowed them; and they were fearful as they entered the cloud. 35 And a voice came out of the cloud, saying, “This is My beloved Son. Hear Him!” 36 When the voice had ceased, Jesus was found alone. But they kept quiet, and told no one in those days any of the things they had seen.

No doubt, this dramatic moment would have left any of us speechless!  All human greatness combined could not be compared to the God-ness embodied in Christ!  God the Father spoke authoritatively about God the Son.  And when the cloud cleared the Greatest Human Being to ever set foot on the soil of the earth, Jesus, was standing alone before him.  Singled out in His greatness by a wonderful, approving, act of God the Father, the extreme uniqueness of the Savior was magnified.  He was no mere man!

Let’s contemplate today the great God-ness of our Savior.

Let’s rejoice in the marvelous redemption plan of the Father.

Let’s be sure that the biographies of The Greatest Human Being of ALL Time recorded in Matthew, Mark, Luke and John are read (and reread) by us often.